Dr. Nina Smart ‘smartly’ moderated a fascinating panel at the NGO CSW Forum, Co-sponsored by Soroptimist International and the North American and Europe CSW Caucus. Speakers included survivors, researchers, advocates and educators, all aimed at revealing the centuries old cultural practice of FGM/C that exists everywhere in the world, affecting 200 million women and girls every year. 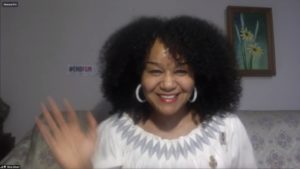 Clearly there is a need for global awareness, advocacy and action to eradicate this act of violence against women and girls, the impact of which can have lifelong effects, both medically and psychologically, including multiple medical complications, trauma and even death. One of the primary needs is education so that each of us, in every sector of society, can be informed advocates armed with good resources.

Highlights from each speaker include:

Mariya Taher, co-founder and U.S. Executive Director of Sahiyo, showed us how great the issue is for women and girls with at least 1/4 of a million women impacted each year in USA alone, despite new federal laws banning the practice and also taking children out of the country to be cut. Only 39 of the 50 states have passed laws against FGM. Education and advocacy is crucial! 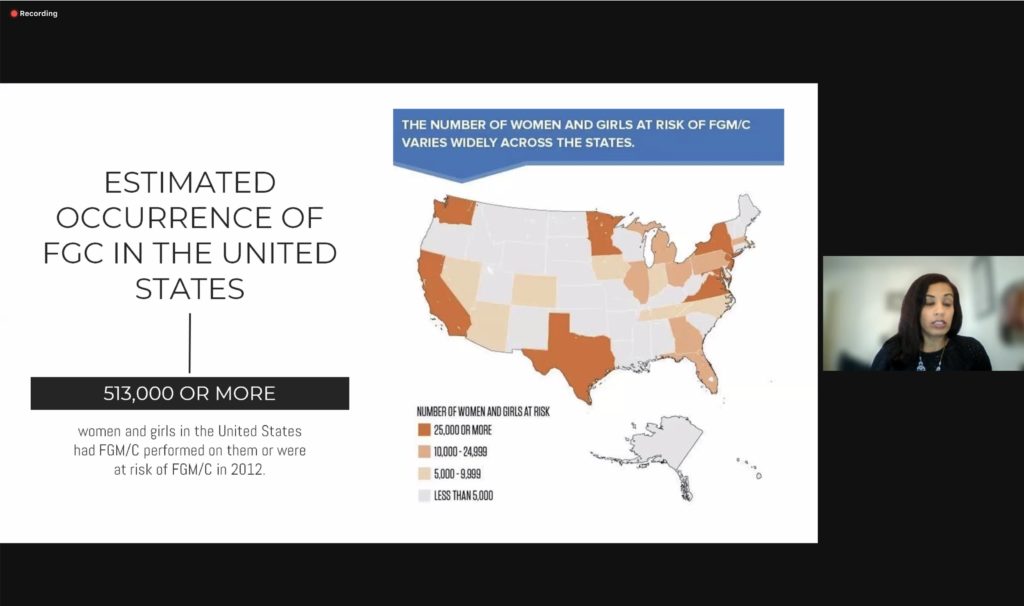 Photo: Anti-FGM activist & survivor, Mariya Taher of Sahiyo , shares statistics behind women & girls affected by FGM/C in the United States. Mariya states that the real numbers are likely to be much higher than reported.

Angela Peabody, Global Woman P.E.A.C.E Foundation, has taken on the cause of education and created curricula for teachers and school nurses- particularly in the state of Virginia. The programme has become so important that high schools are asking for presentations and high school students are becoming youth ambassadors. Additionally training has been given to parents, civic groups, law enforcement and churches. 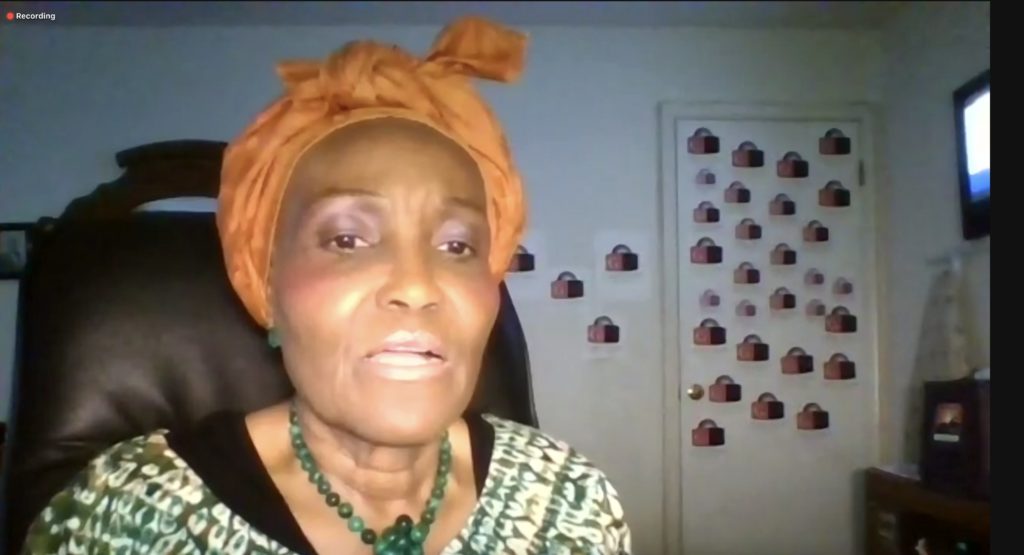 Photo: After returning from the Breakout Room discussions, humanitarian & author, Angela Peabody, spoke of the need for education & medical professionals being knowledgable about FGM.

Dr. Ann-Marie Wilson from ’28 Too Many’ revealed that research shows that 28 of the countries in the African Continent engage actively in the FGM/C practice with high rates of participation and endorsement – as high as 38-93% in eight of the countries. The harmful practice is centuries old and the resolution will require a ‘top down’ approach, changing policies through provision of good research and a ‘bottom up’ system where local people assist in changing the practice by realising the harmful affects. 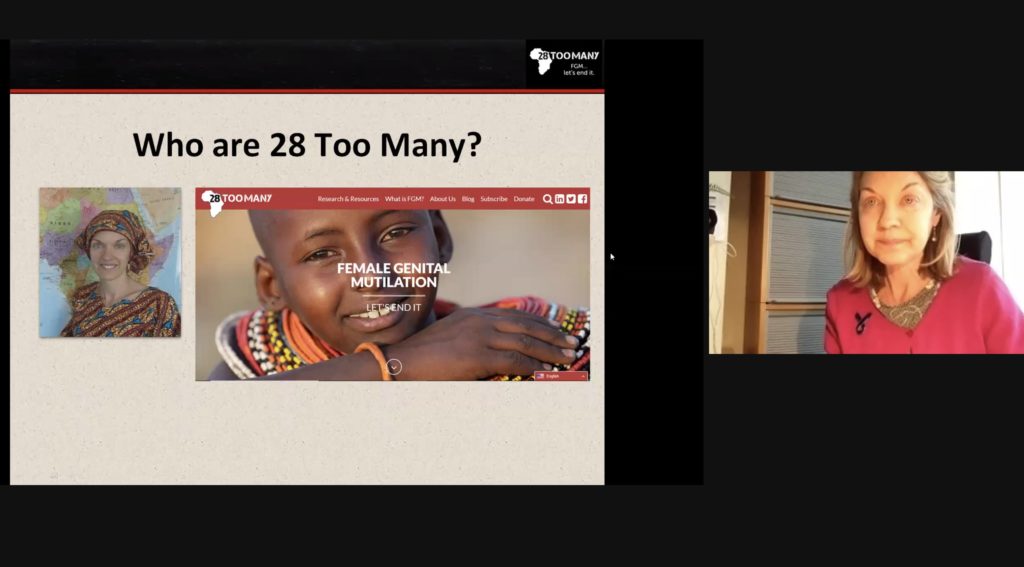 Aminata Bah, ambassador of END FGM EU Network, said FGM/C impacts 137,000 women and girls in the U.K. each year, with 600,000 survivors and 187,000 at risk in 13 EU counties. The U.K. is focusing on prevention and building better data. Aminata addressed the increased risks and consequences to vulnerable women and girls due to COVID-19 and the urgency the network has felt to continue to stay vigilant even if they had to do it virtually. 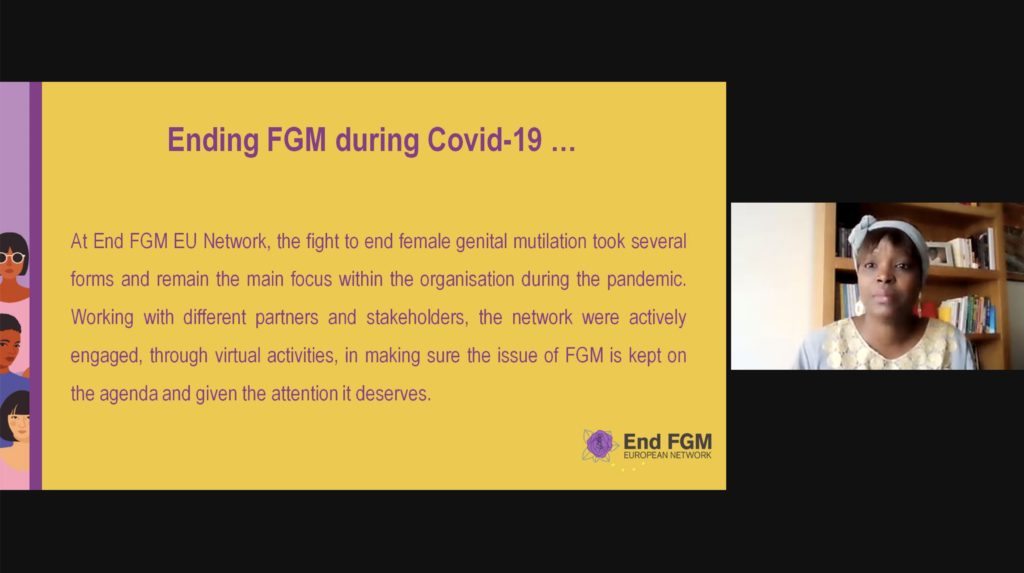 Bev Bucur, Soroptimist International Director of Advocacy, shared news of the Road to Equality President’s Appeal, and its work to address FGM/C, part of a two-year programme that focuses on six human rights themes affecting women and girls. SI has partnered with the Global Media Campaign to fund 6 media trained activists, known as the ‘Soroptimist Six’ from 5 countries in Africa. Each advocate works to locally influence elected and religious leaders about the danger of FGM/C through radio, television and through social media. Soroptimist International supports the women through financial support, to increase the effectiveness of their ongoing advocacy campaigns.

Photo: SI Director of Advocacy presenting the work of the SI Road to Equality in support of the Soroptimist Six

Ifrah Ahmed, founder of the Ifrah Foundation, is also one of the ‘Soroptimist Six’ advocating to end FGM in Somalia and around the world. She told us about the lack of medical services, particularly during COVID-19 pandemic, for girls who have been cut and that six girls had died in one town alone.  The problems have become increasingly more serious due to many of the international workers having left, making Soroptimist support of GMC and the Soroptimist Six, even more important. 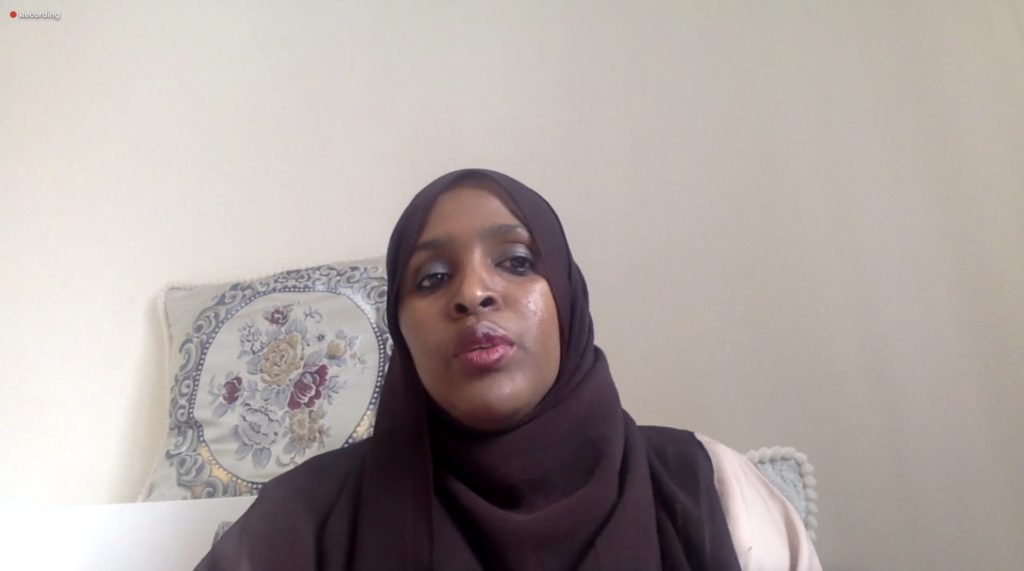 Photo: Ifrah Ahmed is one of the ‘Soroptimist Six’ and established the United Youth of Ireland (2010), and the Ifrah Foundation, devoted to eliminating FGM.

Over 60 participants in the session went to breakout rooms after the panel presentations and collaborated on ideas. Following are just a few of the ideas:

Many great calls to action were shared:

Watch a recording of the Parallel Event above.