As the United Nations headquarters, and home to the General Assembly, all areas of the UN’s work is discussed in New York. The centre is also the headquarters of UN Women, the United Nations Entity for Gender Equality and the Empowerment of Women, created in 2010. The team of SI UN Representatives in New York cover gender equality, ageing and older persons, the girl child, trafficking, migration, education, sustainable development, financing for development, peace and security. This team of UN Representatives also cover UN processes and functional commissions such as the General Assembly’s 6 committees, the High-Level Political Forum (HLPF), the Commission on the Status of Women (CSW), the Commission on Social Development (CSocD), and the International Conference on Population and Development (ICPD), all of which promote SI’s presence and enhance the impact of our advocacy efforts. 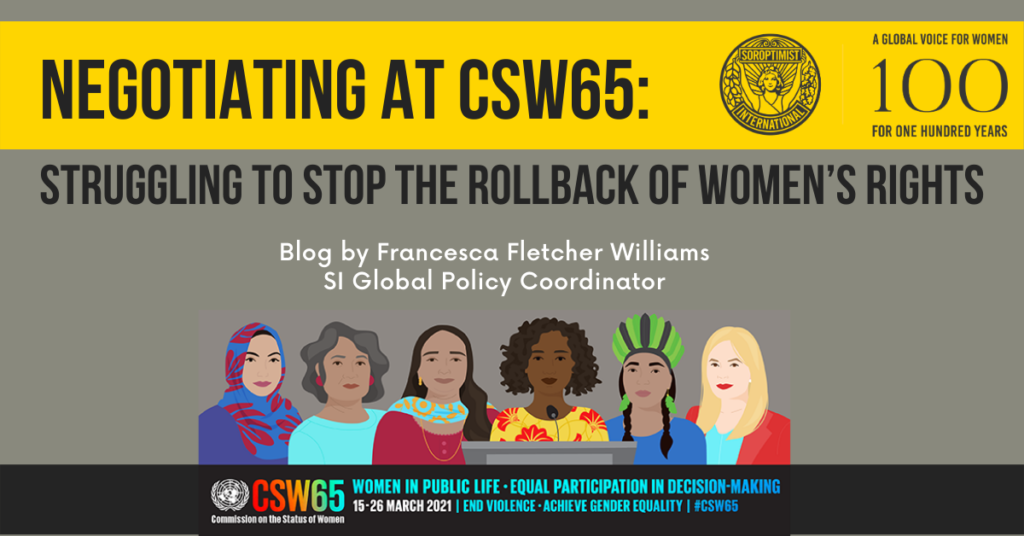 Negotiating at CSW65: Struggling to Stop the Rollback of Women’s Rights

Blog by Francesca Fletcher Williams, SI Global Policy Coordinator. It’s commonly said at the United Nations that ‘you know a negotiation went well when everyone is equally unhappy’. The idea is that every country, every group should have to compromise an equal amount to reach a ‘balanced’ agreed outcome. This 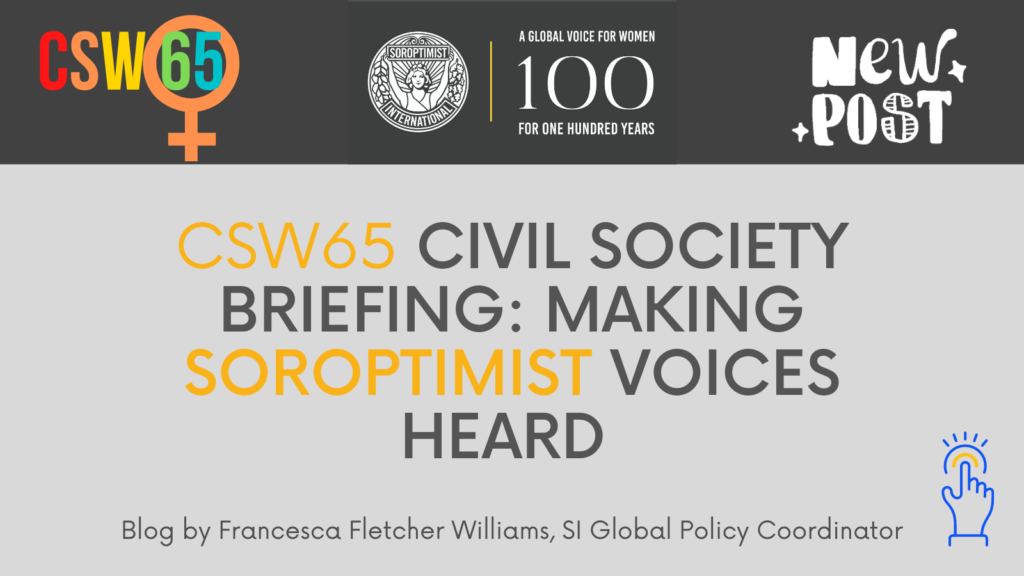 by Francesca Williams, Global Policy Coordinator “CSW is the best representative of how much women and young people believe in the United Nations (UN). I emphasise the importance of this year’s theme during COVID, given that women have demonstrated such leadership – but much of the leadership is informal, and 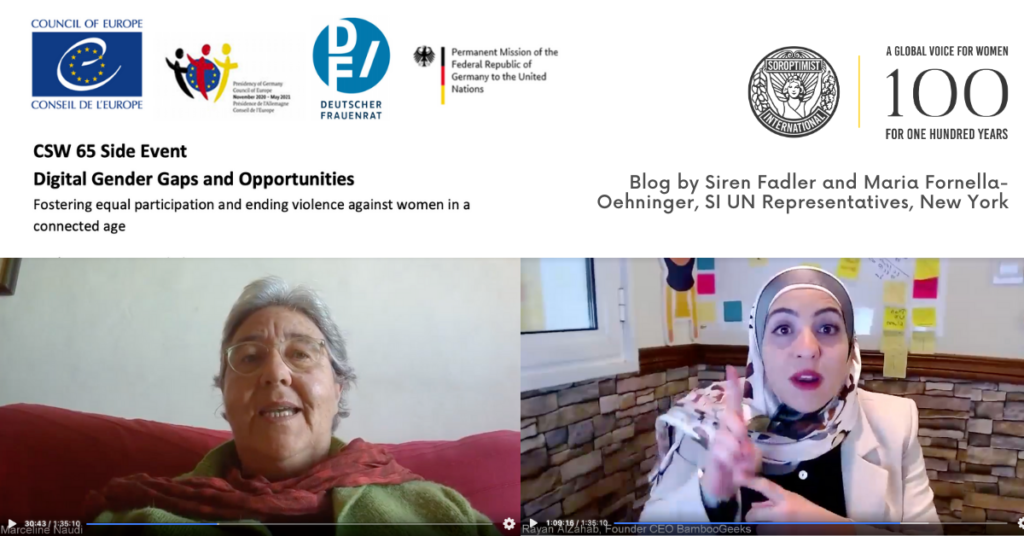 Blog by Siren Fadler and Maria Fornella-Oehninger, SI UN Representatives, New York. Siren and Maria report on the CSW65 Side Event, "Digital Gender Gaps and Opportunities – Fostering equal participation and ending violence against women in a connected age", organised by Germany and the Council of Europe. Accelerated by COVID-19 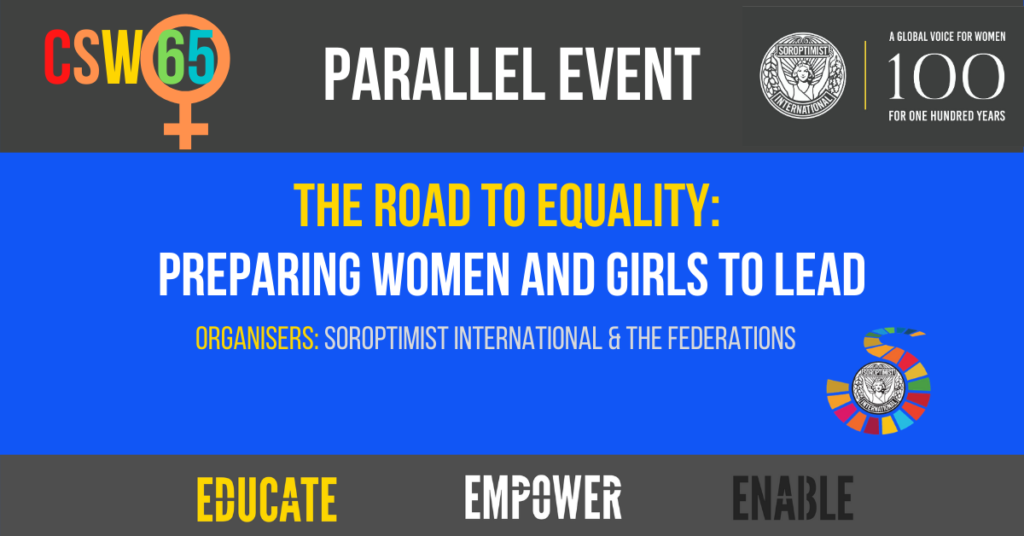 The Road to Equality: Preparing Women and Girls to Lead – CSW Parallel Event 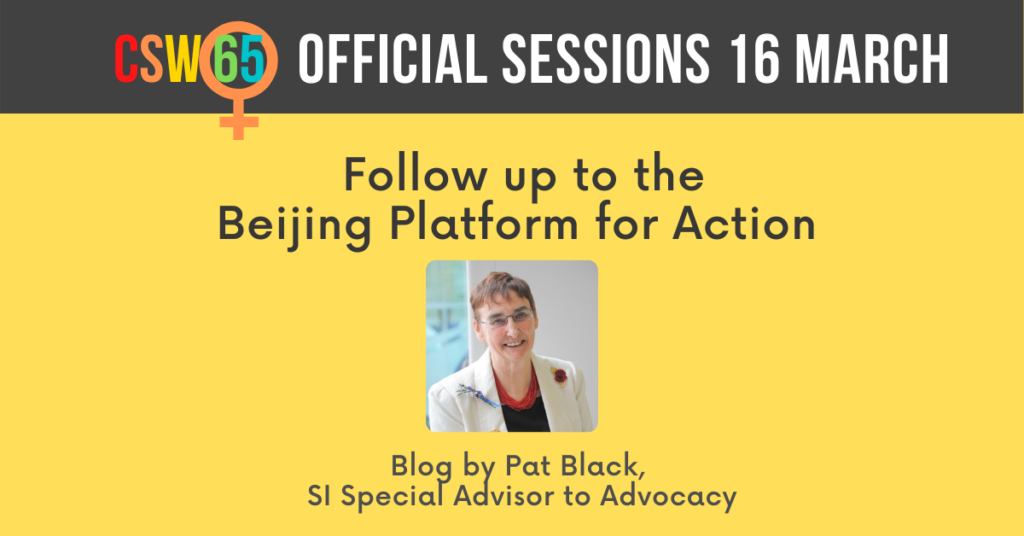 CSW65 Official Sessions for 16 March: Follow up to the Beijing Platform for Action

Blog by Pat Black, SI Special Advisor to Advocacy. The Committee of the Commission on the Status of Women (CSW) continues to meet in formal session at the United Nations and online.  During the last session on 16 March, the members have been considering Agenda Item 3: Follow-up to the 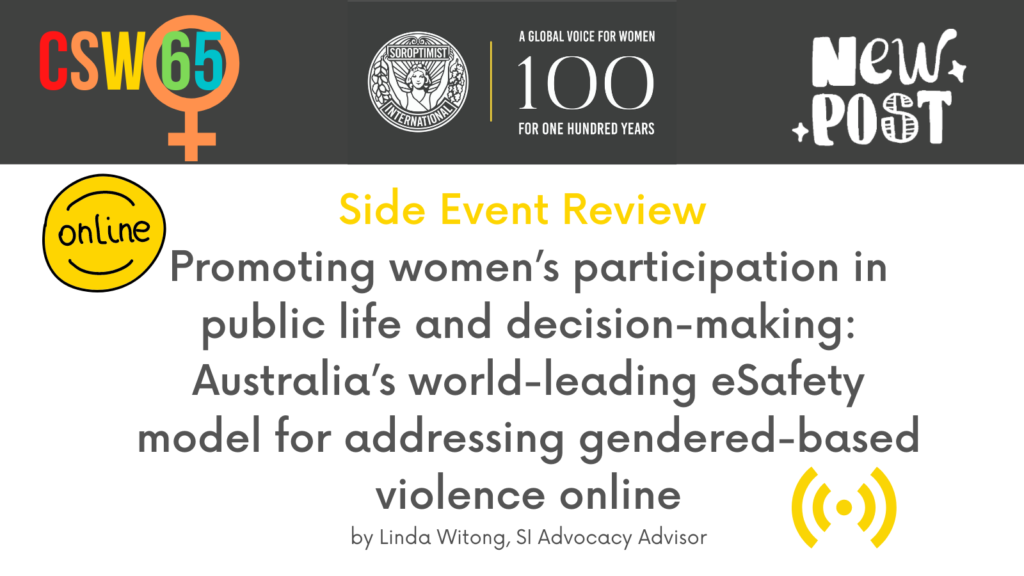 Blog by Linda Witong, SI Special Advisor to Advocacy. Being aware of the fact that international research had determined that women and girls were subjected to very high levels of online abuse simply because they were women, I joined this seminar to learn more about the perils of being a 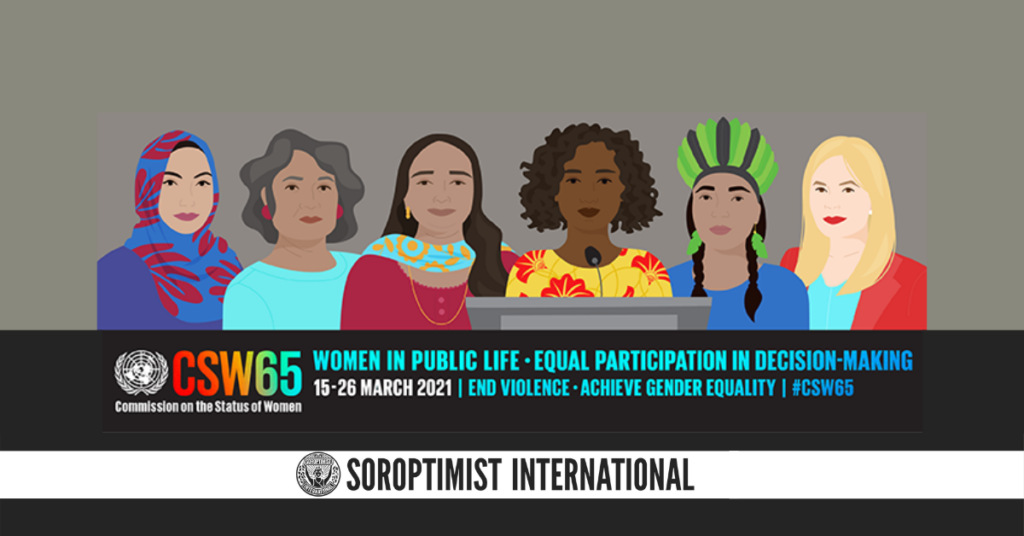 The 65th session of the Commission on the Status of Women (CSW) will take place from 15 – 26 March 2021 in a hybrid format with mostly virtual meetings. Delegates of Soroptimist International (SI) will attend together with representatives from Member States, UN entities, and accredited non-governmental organisations (NGOs) from all 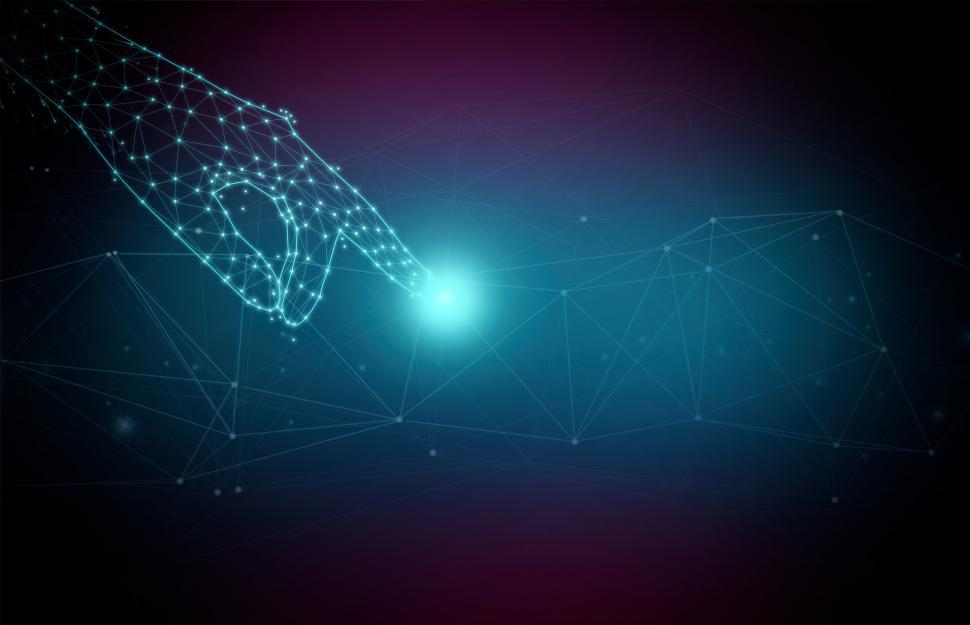 How Digital Finance Can Help achieve SDGs Around the World

As the fifty-ninth session of the Commission for Social Development (CSocD59) commences, SI New York UN Representative, Maria Fornella, offers her thoughts on how the phenomenon of digital finance can help achieve the Sustainable Development Goals (SDGs) set out by the 2030 Agenda. "During COVID-19, governments have developed an enormous

‘We the Peoples’ in Conversation with UN Secretary-General 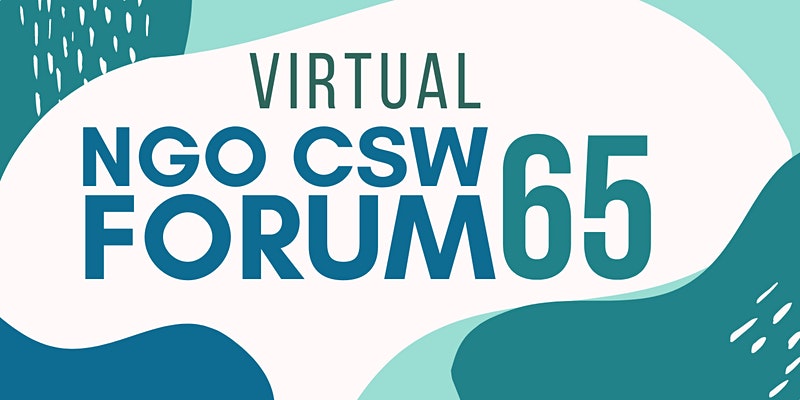 59th Session of the Commission for Social Development (2021)

The fifty-ninth session of the Commission for Social Development (CSocD59) will take place from 8 to 17 February 2021 at the United Nations Headquarters in New York, and for the first time, participants from across the world are able to join virtually. The Commission is the advisory body responsible for Mitigating the Human Rights Risks: The Rule of Law and COVID-19

Trafficking and The Girl Child

As part of Soroptimist International’s (SI’s) series of blogs discussing the Beijing Declaration and Platform for Action (BPfA), SI United Nations (UN) Representative, Jacqueline Shapiro, examines the topic of the girl child, recalling the work by activists to insure the girl child was included in the BPfA, and that ensuring

SI UN Representative, Maria Fornella-Oehninger, brings us the next in a series of blogs relating to the Beijing Platform for Action as she discusses the emerging theme of 'gender equality and the implications of the digital revolution'. "There is no aspect of social, economic, or political development that has escaped 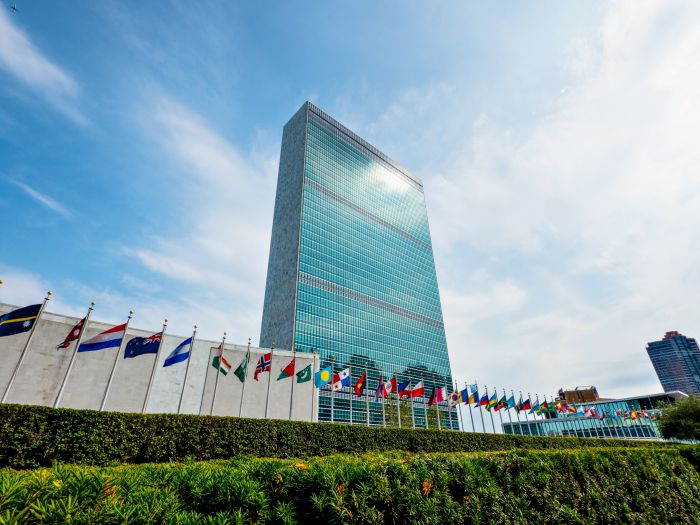 Our Voice at the UN

New York - Part 1. COVID-19 might have silenced the city that never sleeps, but it hasn’t stopped our team of UN Representatives in New York from advocating for women and girls. Our Representatives continue to work virtually, to ensure that the voice of Civil Society will be heard. Our Transformative Pathways to a Sustainable Future

Maria Fornella-Oehninger, SI UN Representative in New York, blogs about the International Science Council's High-level Political Forum Side Event, 'Designing and implementing integrated, context-sensitive and attainable pathways toward achieving transformation'. "Six scientists shared their analysis of how to create pathways to transform economies and societies to achieve sustainability in the The High-Level Political Forum 2020: a whimper or a bang? 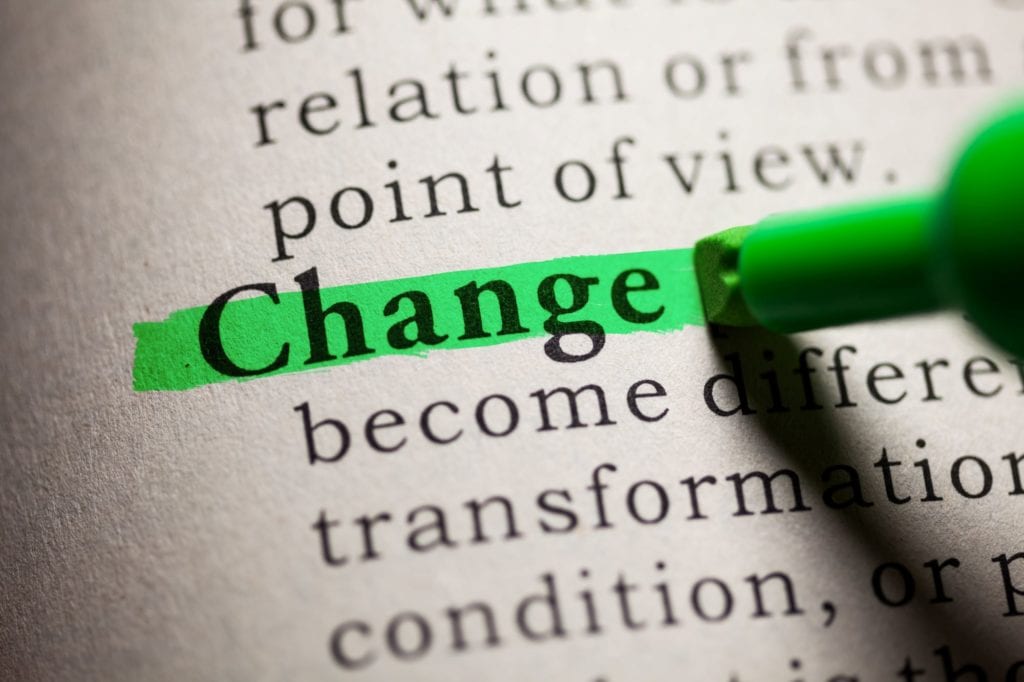 SI UN Representative, Maria Fornella, reflects on the findings of the United Nations Economic and Social Council (ECOSOC) Briefing held on May 11, 2020: 'Joining Forces: Effective Policy solutions for COVID-19'. “There have been as many plagues as wars in history, yet plagues and wars take people equally by surprise.”

We are excited to announce that the window for applications for the position of Volunteer United Nations Representative in New York is now open! The key criteria for applicants are as follows: Must be a Soroptimist living in the New York area; Must be able to speak and write English;

The Rise of Homelessness in Ageing Women

SI UN Representatives, Maria Fornella and Frances Zainoeddin report from the Commission for Social Development 58th session (CSocD 58), which was held in New York during 10-19 February 2020. "Soroptimist International organised a side event on 'The Rise of Homelessness in Ageing Women', to discuss the work being done by 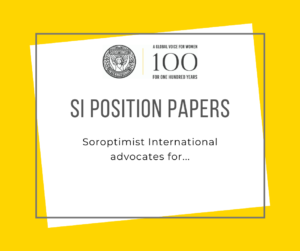 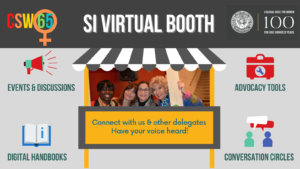