TWELVE MILLION PEOPLE ARE REPORTEDLY IN NEED OF LIFE-SAVING AID INSIDE SYRIA AS THE CIVIL CONFLICT ENTERS ITS FIFTH YEAR. CLOSE TO 4 MILLION PEOPLE HAVE SOUGHT REFUGE IN NEIGHBOURING COUNTRIES”. (Source: United Nations) Article written October 2015. Earlier this year UN Secretary-General Ban Ki-moon speaking in Kuwait, warned that
EARLIER THIS YEAR, WORLD REFUGEE DAY JUNE 2016, SAW THE RELEASE OF A GLOBAL TRENDS REPORT BY THE UN REFUGEE AGENCY, CLEARLY SHOWING THAT GLOBAL FORCED DISPLACEMENT INCREASED IN 2015, RESULTING IN RECORD-HIGH NUMBERS. What are those high numbers? The report showed that by the close of 2015, 65.3 million
In the past two years, SI has reported on the wonderful work of the Dutch Soroptimists and the Soroptimist/UNICEF project Syria 'Back to School'. Thanks to their astonishing hard work, since 2014 they have collected more than € 500,000 which has been used to help build 22 classrooms and 11 container
Picture: UNICEF/Nicky Jansen Earlier this year UN Secretary-General Ban Ki-moon speaking in Kuwait, warned that Syria’s children continue to suffer on what he called “a scale that haunts the soul”. (Article dated October 2015) More than four years since the Syria crisis began in 2011, stories depicting families desperately
Soroptimists and My Book Buddy - working to combat illiteracy. Education sits at the heart
“Internally displaced persons, or IDPs, are among the world’s most vulnerable people. Unlike refugees, IDPs have not crossed an international border to find sanctuary but have remained inside their home countries. Even if they have fled for similar reasons as refugees (armed conflict, generalized violence, human rights violations), IDPs legally
Malaysia – Building Bridges Beyond Borders - 5 refugee schools Soroptimist International Educates, Empowers and Enables females to realise true potential. It is widely demonstrated that education is the key for escaping poverty, for a girl, woman, family, community and a country. Education is the pathway for empowerment and choice
A blog by SI UN Rep, New York, Barbara Rochman "The United Nations World Refugee Day is celebrated on 20 June every year. The world celebrates so that we do not forget the needs and contributions of those millions of people who have fled their countries because of conflict or
On September 11, 2017, Soroptimist International France organised a Day of lectures and debates at UNESCO on the theme "Literacy, Lifelong Learning, A Sustainable Future for All"* Where do we stand today? One way to understand today's reality in the world: 263 million children and youth are not in school
12 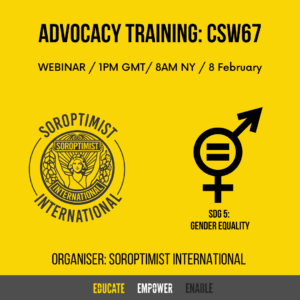