“To be a refugee girl means that we are always constantly on the edge of eviction because we cannot afford to pay the rent on our house. I am afraid of the moment that we become homeless……. then I might well accept to marriage my ex…”

This and many other messages were delivered by inspiring, and remarkable girls, who spoke up at the United Nations, New York, on the International Day of The Girl 2019. The world’s leaders got to know a little of what it means to be a girl in their part of the world.  The theme ‘Girl Force: Unscripted and Unstoppable’ called for the world to listen to needs, and challenges faced by girls’ everywhere.

Since 2012, the UN has marked 11 October as the International Day of the Girl. The ‘Girls Speak Out’ 2019 meeting was organised by the Working Group on Girls, in partnership with the Governments of Canada, Peru, and Turkey, and delivered an opportunity for girls’ activists from around the world to call on world leaders to take action to fulfil their human rights, and promote the empowerment of girls. 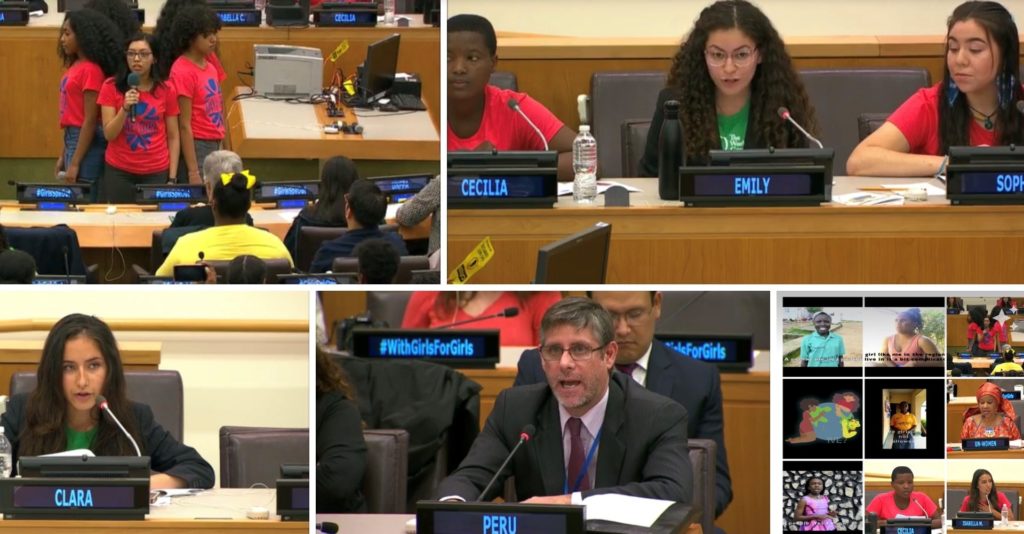 The Beijing platform from Action, is one of the most progressive policies to advance the human rights for women and for girls,adopted 25 years ago in Beijing, China, at the World Conference of Women.

The Platform for Action specifically calls on the global community to:

Not long ago the world watched a young activist in action, Greta Thunberg at the United Nations Summit, her speech, based on science showed passion, enthusiasm, and anger, leaving many impressed, and others shocked. Committed to a radical cut in carbon emissions to shift away from a catastrophic climate breakdown, something that will affect Greta’s peers and those who come next the most.

Girls have strength, intelligence, and big dreams, however, they are also the victims of early marriage, female genital mutilation, trafficking and discrimination.  Deputy Secretary General Amina Mohamed, proudly recognised and celebrated the “sassy and smart” girls around the world, initiating global movements towards equality.

The message seems crystal clear; girls demand rights to education, health, housing, safety, and an end to discrimination, early marriage, female genital mutilation, and trafficking. They demand respect for “the human rights of the girl child in all areas and stages of life”(Working Group on Girls), and they must be empowered to develop their full potential as women.”