A blog by Linda Witong, Special Advisor to Advocacy

“Twenty-five years ago, 186 countries gathered in Copenhagen, Denmark for the World Summit for Social Development (WSSD), joined by 2,300 representatives from 811 non-governmental organisations and created the Copenhagen Declaration and Program for Action. This year marks the 25th anniversary of this landmark Summit. The Summit was important as the Heads of State and Government established a new consensus to place people, not the economy, at the centre of the concerns for sustainable development, and also pledged to eradicate poverty, promote full and productive employment, and foster social integration, to achieve stable, safe and just societies for all. 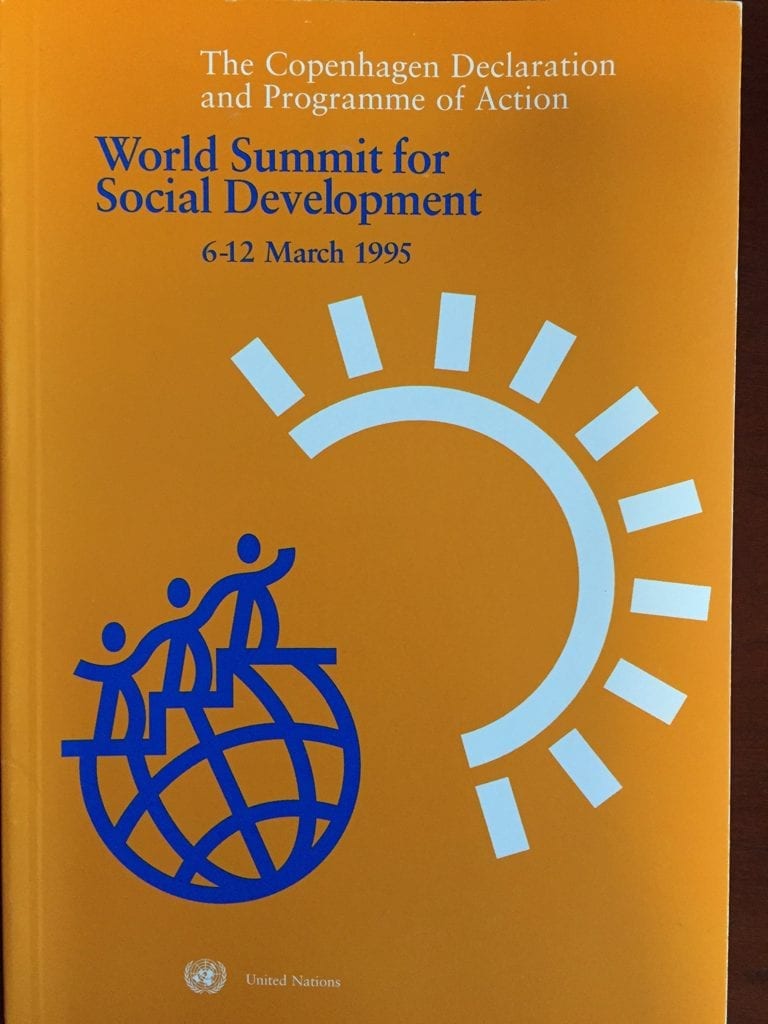 To meet these goals, a total of 10 commitments to promote social development and social justice were laid out in the Copenhagen Declaration and the Programme of Action. These commitments were to be urgently addressed into the twenty-first century, presenting a vision and commitment that still remain valid today.

For example, in 1995 it was acknowledged that social and economic development could not be secured in a sustainable way without the full participation of women. Equality and equity between women and men was to be a priority for the international community and, as such, was also to be at the centre of economic and social development, which empowered them to maximise their capacities, resources, and opportunities

In an effort to rectify inequalities relating to social conditions and without distinction as national origin, race, gender, age or disability; they also committed themselves to achieving equality and equity between women and men by promoting and protecting women and girls’ human rights and fundamental freedoms by, for example, attaining the goals of universal and equitable access to quality education, as well as early childhood and lifelong education for all ages, with women and girls to be a priority group.

They also committed to providing the highest attainable standard of physical and mental healthcare including reproductive healthcare to women and girls and to establishing policies, objectives, and goals that enhanced the equality of status, welfare, and opportunity of the girl child, especially in regard to health, nutrition, literacy, and education; recognising that gender discrimination started at the earliest stages of life.

In 1995, States also agreed to remove all obstacles to woman’s access to credit and other productive resources as well as to their ability to inherit, buy, hold and sell property and land equally with men. States were to also formulate or strengthen policies and practices to ensure that women, including those employed in informal work, were enabled to participate fully in paid work and in employment through such measures as education, training, appropriate protection under labour legislation, the provision of quality child care and other support services. There would also be an increase in the participation and leadership roles of women in political, civil, economic, social and cultural life and in development.

The States also addressed other issues that are extremely relevant today including eliminating all forms of violence against women or girls, migration, protecting the integrity and sustainable use of our environment, and improving the possibility of older persons achieving a better life.

Yet today, almost 25 years after the World Summit for Social Development, social progress remains slow and uneven, and major gaps remain. For example, social, economic, political and cultural gender inequality still persists and has even increased in many countries in recent years, undermining efforts to achieve gender equality, to meet the commitments made at the World Summit, and to achieve the 2030 Agenda’s overarching pledge to leave no one behind”.