“The 14th Session of CCPCJ began in Kyoto, Japan, on March 7, 2021. Its participants began by observing that it had been 50 years since Kyoto had hosted such a conference and observed that this was the first international-level event which has been held in Japan since the beginning of the COVID 19 pandemic.

During this high-level meeting, it was apparent that the pandemic was on everyone’s mind; it had even been incorporated into the Kyoto Declaration which was adopted by Heads of State and Governments at the beginning of the session. Both the parties to the Kyoto Declaration and UN Secretary-General, Antonio Guterres, agreed that the disruption caused by the COVID 19 crisis had presented criminals with new opportunities to exploit the vulnerable and marginalised populations while “lawless behavior in cyberspace” had “created a new domain” for the propagation of crimes. Following that theme, states also pledged to take more effective measures to prevent and end abuse, exploitation, trafficking, and all forms of violence or torture against children, including child sexual exploitation and sexual abuse online and offline, by criminalising such acts, supporting victims, and fostering international cooperation to combat these crimes. 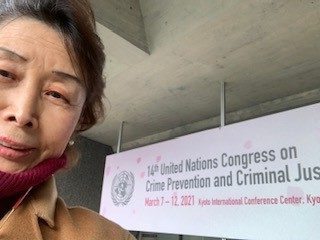 In light of the ongoing experience of the COVID-19 pandemic, and in preparation for any similar future challenges, the parties to the Kyoto Declaration also acknowledged the need to review criminal justice systems in order to make them more effective, accountable, transparent, inclusive, and responsive through promoting digitalisation. And while they were at it, they also agreed that crime prevention would now include addressing the root causes, and risk factors that made different segments of society more vulnerable to crime. Moreover, those who committed crimes would now have to worry about being a focus of measures to address the economic dimension of their crimes as well as deprive them and their criminal organisations of any illicit gains.

Victims’ rights, as well as mainstreaming a gender perspective into crime prevention, were also a primary focus of the Kyoto Declaration. Crime prevention policies, programmes, legislation, and other actions were to be implemented in order to prevent all forms of gender-related violence, crime, and victimisation, including gender-related killings, by undertaking an analysis of gender-related specific needs and circumstances, as well as by soliciting contributions from impacted groups. States were also to prevent and counter domestic violence, and to that end, take effective measures within their domestic legislation, such as ensuring appropriate handling of cases, coordinating the role of welfare and criminal justice institutions, and providing a safe environment for victims.

Due to safety precautions, in-person attendance was limited to one-fifth of the venue’s full capacity.

Finally, new and emerging forms of crime, as well as rehabilitation, were also a focus of the Kyoto Declaration and the speakers during this event. New measures which addressed both crime prevention and rehabilitation had to provide access to quality education as well as promote awareness-raising activities regarding law and policies, including public law-related education for all.  It was believed that these efforts would equip people with the values, skills, and knowledge necessary to foster a culture of lawfulness, cognizant of cultural diversity, and based on respect for the rule of law.”

Visit the UN News website for more from the Kyoto Crime Congress.