“The International Labour Organisation (ILO), is a specialised organisation of the United Nations, which deals with labour issues and has its HQ in Geneva, Switzerland. ILO was established after World War I in 1919 by the Treaty of Versailles and is the oldest specialised organisation of the UN. The ILO was founded on the idea that lasting peace is not possible without social justice.  To achieve social justice, the ILO has formulated key objectives such as: promoting the right to work, introducing and developing social security, the right to workable work (decent work), equal rights for men and women, the fight against child labour and the promotion of social dialogue between employers, employees and the government. In 1969 the ILO received the Nobel Peace Prize.  Today, 187 countries are members of the ILO. Every year, the ILO organizes the annual International Labour Conference (ILC) for two weeks in Geneva, at which current topics of labour law are discussed at world level.  One unique aspect of the Conference is that it is a tripartite, meaning negotiations take place between three parties: official representatives of the government, employers and employees’ organisations (trade unions). This leads to recommendations and conventions at world level. Conventions are subsequently ratified by the member states and transposed into national legal texts.

The plenary sitting of the International Labour Conference was opened with the introduction of the keynote speakers, who gave speeches about the “Future of Work”.

The first speaker, President of the Marshall Islands, Ms. Hilde Heine, declared that the celebration of 100 years of the ILO gives us reason to celebrate current labour standards and continue to push towards achieving equal opportunities, decent work opportunities, realising the SDG’s and social justice. Click here to watch her speech: https://ilo.cetc.stream/2019/06/20/discours-de-s-e-mme-hilda-heine-presidente-de-la-republique-des-iles-marshall/ 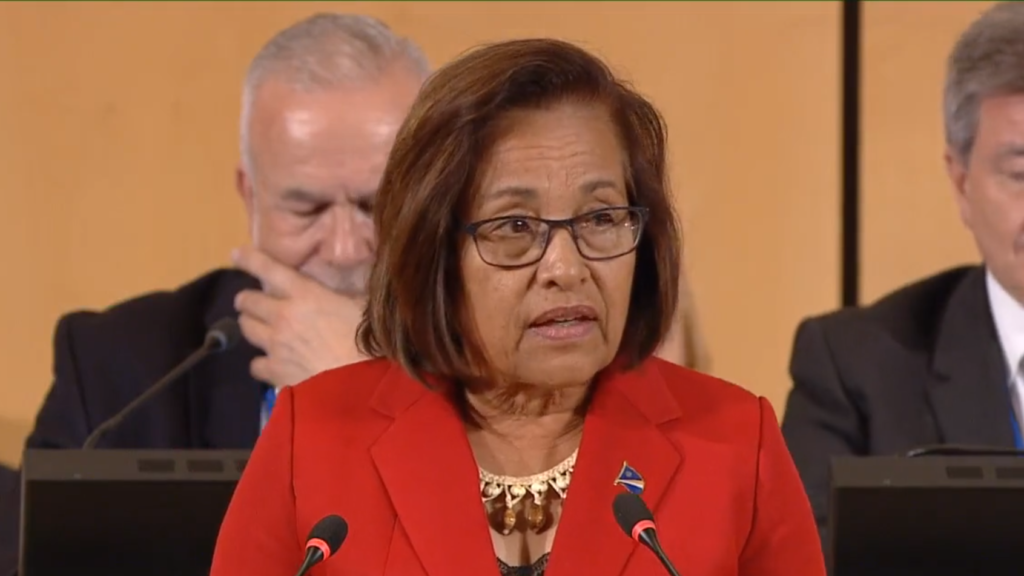 The second speaker, King Filip of Belgium, addressing the public, stated that this meeting is an opportunity for all countries to reaffirm the importance of ​​social justice and the promotion of decent work. The King expressed his appreciation for the unwavering efforts that the ILO has made since its inception a century ago and for the progress made across the world. He declared that, as a result of these efforts, child labour has been considerably reduced, women have been given access to the labour market, millions of workers have escaped poverty, working time has been shortened and most countries have, at least, a basic social security system. Although progress is uneven in the world, it is real!

Looking to the future, the King explained that we will see technological changes and the urgent need to protect our environment and so our work patterns will have to evolve fundamentally. Our classic growth model has reached its limits and must be replaced by something radically new. He predicted that digitisation and new technology will change the content of many existing jobs and that the majority of employees across the globe will have to be retrained and a significant number will have to take a completely new direction on the work floor.

King Filip summarised a series of challenges for the ILO: the increase in inequality and the feeling of insecurity that comes with it, discrimination against women, migration flows, the revival of nationalist and identity movements, the crisis of multilateralism, the technological revolution and climate change. The King expressed the wish that the ILO, within the wider framework of the United Nations, will continue to shape social justice and that these efforts contribute to a better future for all workers, both men and women.

The 108th Session of the ILC was a major event from which a new convention and recommendation to combat violence and harassment in the workplace was adapted, a major step towards eliminating workplace violence”.

For more information about the ILO, visit the website: https://www.ilo.org/global/lang–en/index.htm.